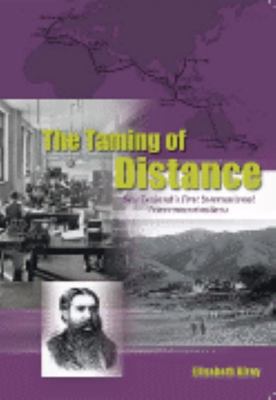 On 19 February 1876, New Zealand became telegraphically linked to the world - it joined the international Victorian "internet". Contact with Sydney now took only seconds and London less than 24 hours. But unlike today when everybody is their own instant "telegraphist", in 1876 the system needed a small army of specially trained undersea cable operators. The Taming of Distance tells the story of those people - Englishmen, Australians and New Zealanders - who worked the cable, first from an isolated rural, coastal location near Nelson and later from Wellington central. But it is far from a narrow story of undersea telegraphy. It is set in the wider context of British ownership of the line, and interaction with the New Zealand Government and particularly the New Zealand Telegraph Department. It tells of a rapidly changing world of national and international telecommunications which, by the time the line closed in 1932, bore little resemblance to that of 1876. Above all, it tells how those men (and later, women) and their families, lived and worked as part of a unique international community.

Foreword; Acknowledgements; Explanatory Note; Introduction; Beginnings; The Cable Arrives ; The Technology; The Players; Towards a Deal; Australian Interlude; The Deal ? At Last; A Feeder Not a Bleeder; Not All Plain Sailing; A Growing Community; Ten Years On ? Contract Renewal; The Press Comes to Cable Bay; The Golden Years; The Pacific Cable ? and a New Alternative; Devastation ? and Further Competition; A New Way Forward; Cocos Interlude; Fire, War ? and Departure; Change, Change ? and More Change; Endings; Some Conclusions; Postscript; Appendices; Endnotes; Bibliography; Index; About the Author